Every Affiliate has his own routine on finding new offers to run. My daily routine start with spying around on my spy-tool (Adplexity) the offers that are doing most of the volume and running from a while, etc.

This time i want to try a different approach: I will rely on the weekly updated offer lists from the offer networks, where i’m subscribed. That can be a really efficient method of finding some the best converting offers without spending much time and funds.

The offer lists comes with a lot of useful information: Every network send tables about their best converting offers by volume, epc, etc. (excluded the exclusive ones), so you have something to start from. But keep in mind that the major part of those offers are running from a while and the Advertiser during that period had the time to optimize his campaigns to the best target he can have, and also he has maybe a higher payout since the networks after a while give advertisers payout bumps. So don’t expect those epc-s from the beginning.

We are going to test the first one from the list

The information i need to know before start testing those offers:

At first i need to know if those offers are still up and running (maybe the offers stopped working from this week, since the table refers to the last week)?

Than i need to know where the offers are running (the traffic source) and also with what landing page are advertisers promoting those?

For that information i always use a spy-tool, specifically Mobile Adplexity.

Mobile Adplexity gives you the chance to spy for mobile ads on the biggest traffic sources and offer networks, worldwide. From the offer list for LeadGen offers from ClickDealer. I’m going to try the first one “[WEB+WAP] Chance to win iPhone 6s /DE/AT/CH SOI” and also the last one “[WEB+WAP] Win Samsung S7 Edge /SE *NEW*” since they have the best epc.

The first sweepstake i will try to run just in Germany at first, so i will do a search in Adplexity with the name of the offer “Gewinnspiel” (i find that in ClickDealer), just in one geo, Germany.

The filtering i did, is for the last week and sorted the ads from those which received most of the traffic.

From Adplexity i can see that a lot of advertisers are doing that ad. And from the Ad Trend we see that the ad is running everyday during the last month and occurred to the spy-tool in average 30 times in a day. And The offer is running on PopCash and Adcash for the most of the traffic. So i will try with Adcash since it has received most of the traffic. 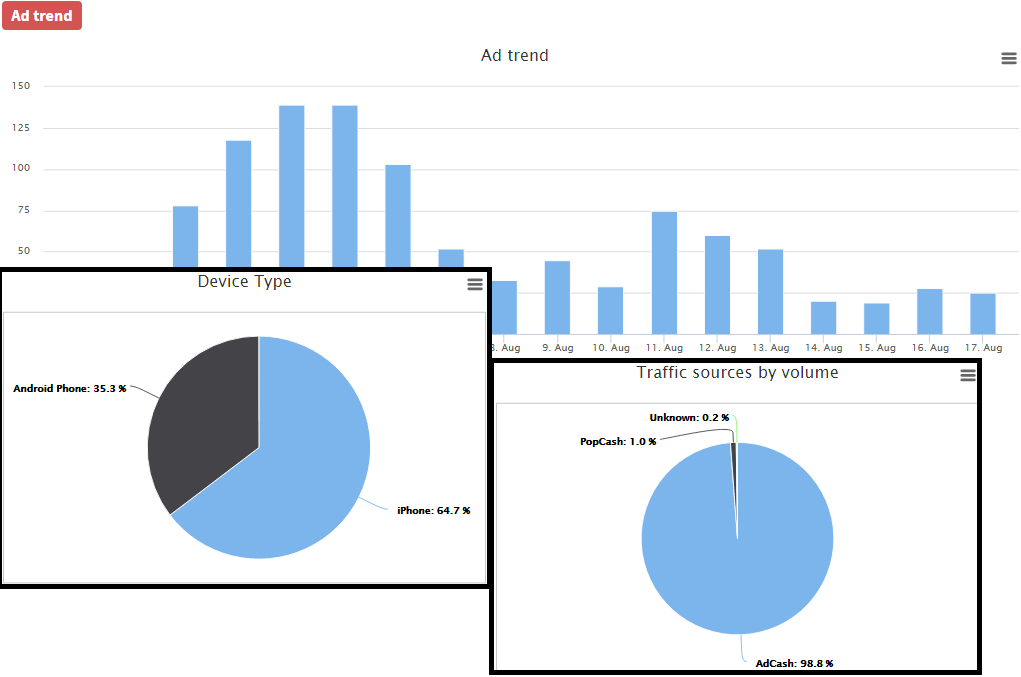 The next step is to rip the landing page and create that one in my tracker (Funnel Flux in this case). I download that directly from Adplexity and i set that at Funnel Flux with the built in LP uploader (Fluxify This Page). I can strip from scripts by hand the LP, but since there is a built in option in Fluxify This Page to break analytics (in case there is any script that send info to the old lp owner) i use that one.

I will not use only the LP that i ripped but also spit test that with one of my best LPs. The Funnel will be simple: just one offer with two landing pages.

For the Sweden offer will do the same. From the analytics i see that the offer is running mostly on Popads. I will create just one campaign for Popads.

After 24 hours both of the offers has converted, the Sweden ad is already profitable even with just one conversion since it has a high payout. The German ad is losing money but after some optimizations (placement blacklists and choosing the best paths) also that one will be profitable.

I suggest when you don’t have a lot of time to spy around, you can always try network lists.